On March 29, 2014, the Gandhian Young Technological Innovation Awards (GYTI), 2014 were given away at the R J Matthai Centre For Educational Innovation (RJMCEI) in the Indian Institute of Management Ahmedabad (IIMA), through the hands of PadmaVibhushan Shri Raghunath A. Mashelkar. Leading academicians from MIT, UC Berkley, IITs, CSIR and other leading research institutes as well as senior executives from various technology companies came together to review 1400 nominations from 313 technology and scientific institutions from 23 states of India. Thirteen awards were given in the main categories while 27 others got an appreciation. The awards were given in the following three categories.

A: More from Less from Many (MLM) Award: These awards were given to the innovations which use significantly less material/energy to create sustainable solutions. Innovations which get awarded under this category are essentially those which focus on frugality and creating value for many by using lesser material, energy, and resource.

B: SRISTI SocioTechnological Innovation Award: These awards were given to the best student’s projects which have a demonstrable proof of concept/ prototype having significant amount of novelty and social application.

C: Strategic Innovation or Technological Edge Award: These awards were to the projects in any field of engineering, pharmacy, medical, agricultural, or other disciplines wherein a breakthrough or a significant technological advancement was achieved.

For the last three years, these awards are being given away by Techpedia, a platform of SRISTI, to appreciate empathetic and brilliant young minds from across the country.

Towards the end of the ceremony, Dr Mashelkar gave an impassioned speech on how he wanted the image of India to change from that of jugaad to cutting edge innovation. He said he was pleased that we are on the right track and those who are making various innovation indices for nations should come as visit such places to see innovation that is happening in India. 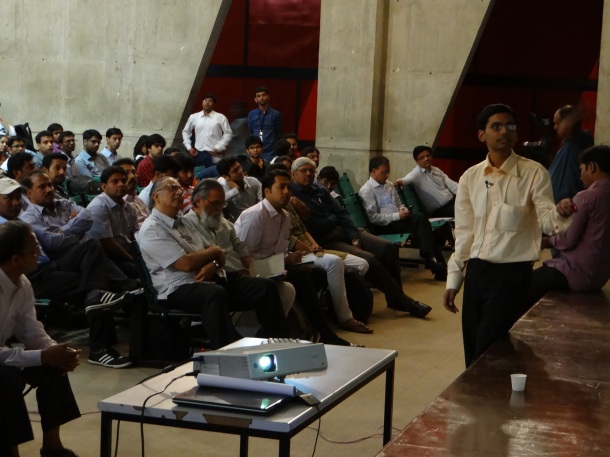 The award ceremony was preceded by presentations and exhibition by students. All dignitaries present took immense interest in the technologies of the participants.