A workshop for herbal practice on cattle

Gujarat Grassroots Innovations Augmentation Network (GIAN) team conducted a workshop at Grambharti Vidyapith on 30th August 2017 with about 40 students of Department of Animal Husbandry. The idea was to demonstrate the efficiency of an herbal solution to get rid of Ectoparasites in cattle and spread awareness about using more and more herb based products rather than chemical based ones. The formulation was pooled from Honey Bee Database and made by SRISTI-Sadbhav-Sansodhan-Laboratory.

Ectoparasite: An organism that lives on the surface of the body or in the skin.[1]

An ectoparasite is a parasite that lives externally on another animal, but does not kill it. Ectoparasites are divided into two main groups, arachnids and insects, classified by structural characteristics. The arachnid class includes ticks and mites. Common examples of ectoparasites include fleas, head lice and bed bugs.

The arachnid class of ectoparasites includes ticks and mites. An arachnid has only two body segments; a fused head and thorax, and an abdomen. It has four pairs of legs as an adult and no wings or antennae.

Ticks are small arachnids, part of the order Parasitiformes. Along with mites, they constitute the subclass Acari. Ticks are ectoparasites (external parasites), living by feeding on the blood of mammals, birds, and sometimes reptiles and amphibians. Ticks had evolved by the Cretaceous period, the most common form of fossilisation being immersed in amber. Ticks are widely distributed around the world, especially in warm, humid climates.

They have different effects on the cattle. They may impact their immunity and affect milk yield. They can also be vectors of other parasitic infections. 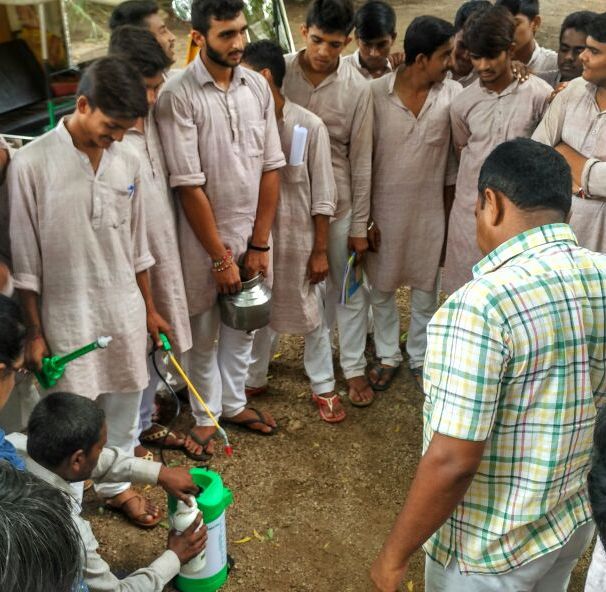 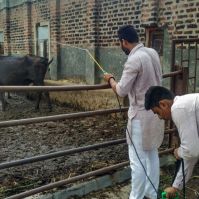 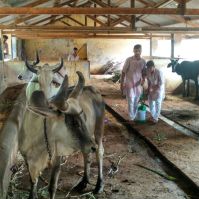 Preparation of Herbal Pesticide Formulation: The formulation is based on the practices of grassroots innovators (Muljibhai Patel, K. Chellamuthu, Sankara Lingam, R. Venkatasubbu and Muthusamy). The grassroots innovators were using different plants and their parts (Azadirachta indica, Pongamia pinnata, Ricinus communis, Vitex negundo, Ferula asafoetida) in different forms (seed cake, aqueous extracts, border crops etc.) to protect their crops from insect and pest attack. Originally, the innovators were using the above mentioned plants and/or their parts as herbal extract for spraying on crops, as border crops and seed cake for soil application. During the process of value addition oil fractions of the plants were used in order to increase efficacy and stability of the herbal pesticide formulation. The herbal pesticide formulation contains oil of four different plants blended in a balanced ratio, which makes it broad spectrum and highly effective. The details of the extraction procedure and formulation are given below

Preparation of Ricinus communis oil: Seeds of the matured pods of Ricinus communis (castor) were collected and dried under net house. The healthy and mature seeds were dried at temperature between 500 C – 700 C for 60 to 72 hours. The oil obtained was filtered to remove the impurities and used for the formulation of herbal pesticide.

Preparation of Ferula asafetida extract: An aqueous extract of Ferula asafoetida (hing) was prepared by adding water in the ratio of 1:10 (hing:water). The solution was allowed to stand for 60 minutes and then stirred vigorously with the help of a mixer. The filtrate was obtained for use in the formulation.

Formulation of Herbal Pesticide: The pesticide formulation was prepared by adding oil of different plants in a sequential manner in a big stainless steel vessel. Required quantity of neem oil was poured in the vessel at room temperature and then karanj and castor oils were added to it under continuous stirring condition. After 30 minutes of mixing at 1500 RPM, distilled Vitex oil was added to it and stirred for 45 minutes. Finally, the hing extract along with the natural emulsifier was added to the above mixture and stirred for 60 minutes. The final composition of the herbal pesticides of SRISTI includes Neem oil (5.0 to 10%), Karanj oil (5.0 to 10%), Castor oil (5.0 to 10%), Vitex oil (0.01 to 0.1%), Hing extract (0.5 to 1.5%) and natural emulsifier (5.0 to 10%). The prepared formulation was left undisturbed to observe any sedimentation. The quality of the product was analysed and the final product was packed in the bottles. A complete cycle of production of the herbal pesticide is given below (Fig. 3). The patent of the above mentioned formulation (SRISTI herbal pesticide – Sarvatra) has already been filed in the name of the innovators to protect their IPRs.

Complete Process of Production of the herbal Pesticides

We  used 4 Sprayers and 60 litres of Herbal Pesticides and tested it in nearby Cowshed to demonstrate students. About number of sprays; it solely depends on size of the cattle, in general one has to ensure that the whole body is covered, then after 3 days we have to spray the same quantity on cattle. Quantity used for each cattle is around 0.3-0.4litre for single cattle.  For making 10 litre, 1 litre of the liquid is mixed with 9 litres of water and then sprayed

Along with 40 students and 2 teachers, GIAN team conducted the testing of the Herbal Pesticide on cattle in nearby cowshed. After the spray an observation table was provided to the students and observations over the next two days has to be noted.

A student asked What are the Areas in which these insects attack on cattle’s body?

Ans: – Near tail, area behind the ears, dorsal side of the limbs